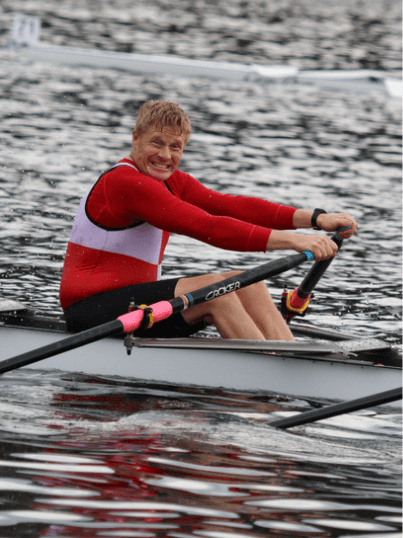 Joining Edison as the Tauranga Area Manager in July 2021 was an easy decision for David Derecourt. “It’s not every day a job opportunity like this comes up in the Bay” David explains. “I had worked with Edison as a client, and always admired their approach and thought I wouldn’t mind working for a company like that one day.”

David has a keen eye for opportunities that challenge and develop him. He recently competed at the Rowing Nationals in Twizel in the intermediate and senior categories against rowers decades younger. “In the singles race I came sixth, and I had nothing left when I crossed the line. But it felt great, especially when I saw how much the race took out of the younger guys too.”

Rowing has been an important part of David’s life since recovering from a major health event in 2011. “I was playing football and had a full cardiac arrest at the beginning of the second half. I was brought back to life on the pitch. Having a quadruple heart by-pass at 39 changed my life, not only in terms of physical and mental recovery, but it made me realise you are a long time dead. You’ve got to live for the moment and not sweat the small stuff.”

David is passionate about rowing and will try to convince anyone standing still to give it a try. His dedication to furthering the sport saw him establish a new rowing club at Rototuna High School attended at the time by his children, and holding positions as Secretary, then President of Hamilton Rowing Club. He’s even drumming up interest in the Tauranga office, installing a rowing machine downstairs for lunch time sessions. There is talk of starting an office championship. David laughs, “Nothing like a bit of competition to get people interested.”

Being part of a team and working towards a common goal motivates David professionally too. “I like being with people and working towards something together. I definitely see parallels between my rowing and work – you get to be part of a team but shine individually as well.” David’s true passion is working with people and getting the best out of them, so naturally his early priority is his team. “It’s really important to get to know what is happening in people’s lives and learn where team members want to grow professionally.”

David likes change and the opportunities it brings. “Edison is going through a period of change, and that really attracted me to this role and the company. Here is a business that is wanting to develop and grow. It’s not comfortable sitting on its laurels and that’s exciting.”